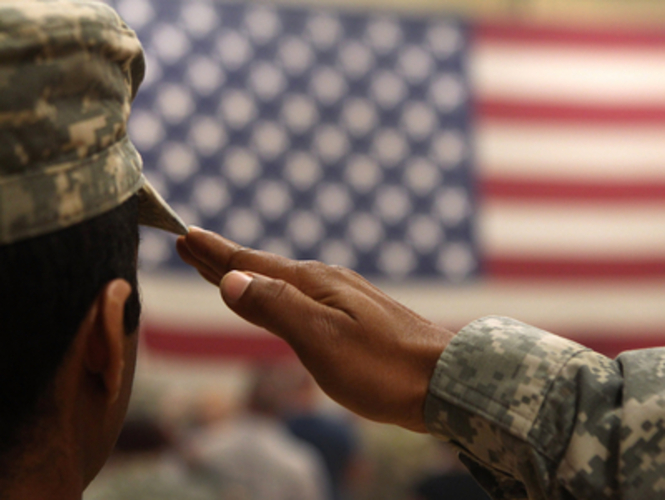 Forget about al-Qaeda and state-sponsored radicalized Muslims, the newest Boogeyman that the US government wants the American public to fear are our own US veterans.

The US Armed Forces are preparing to fight what they call “rahowa” or racial holy war. They claim that white supremacists are joining the military to infiltrate and overthrow what is referred to as the Zionist Occupation Government (ZOG). Academics are proposing that the infiltration scheme includes white supremacists hiding their ties to neo-Nazi groups is secret in order to get passed screeners when applying for the armed forces in recruitment offices.

In reality, there is a great deal of former and current soldiers who have realized that our government has been taken over by the global Elite who are the front for the Zionist Movement that has been working in the shadows to instill global governance.

The mainstream media are using the false flag attack on the Sikh Temple because the patsy, Wade Michael Page was a US veteran who was purported to have ties to white supremacy groups according to the FBI-sponsored Southern Poverty Law Center (SPLC).

The Pentagon has banned military involvement in any group they deem a threat to the agenda of the US government. Author Matt Kennard has written about how the US military would recruit members of supremacy groups when they could not fill in their ranks by normal means with what was called a “moral waiver”.

The SPLC and the Anti-Defamation League (ADL) are working with the military to train soldiers on how to spot extremists in their ranks. These “watchdog groups” point out that some soldiers have tattoos that could be construed as racist.

We can look back at assassination attempts on Obama and see a pattern. They all have been US veterans who were somehow tied to white supremacy groups. This sets the stage for what could be the biggest false flag since 9/11.

Anton Caluori, a resident of Federal Way in Washington State, was arrested by the Secret Service who were assisted by paramilitary police, for making threats against President Barack Obama. Caluori showed police his handgun when they came to his door.

Caluori was a US veteran with an impeccable record. His mother told the MSM that her son has a legal permit for a handgun and that he had never done anything wrong before.

A neighbor who refused to be identified also remarked that Caluori was a quiet man who never bothered anyone; however, he was being taken to a psychiatric hospital to be evaluated.

Another arbitrary witness claimed that Caluori was wearing an “ammunition belt like Rambo” when he met with the police.

The mainstream media is painting a picture of a man who threatened the police with his firearm. Cathy Schrock, a representative for the Federal Way police department said: “The shotgun was coming up to point in the direction of the agents. The two officers were able to close in and take control of the weapon before anyone was harmed.”

Curiously, the FBI says Caluori sent a threatening email to the FBI’s general email address, according to Emily Langlie, US attorney spokesperson. The details of the email are being kept secret; however, Langlie believes that it was a clear threat to kill Obama.

Brian Leary, Secret Service spokesperson in Washington, DC, said that Caluori assaulted one of the police officers that came to arrest him. Leary goes on to say that the email Caluori allegedly sent was “alarming”.

According to Schorck, the police who accompanied the Secret Service claim that Caluori had improvised explosive devices (IEDs) in his apartment. The bomb squad was called to the scene. Although no explosives were found, the police continued to tout that they believed it was a viable threat.

This latest threat against Obama has justified the previous fears of possible assassination attempts by white supremacist groups who are upset about having an African-American president. Although Congress passed legislation in 1994 stating that US Presidents would not have Secret Service protection during their lifetime, Obama has had federal agency protection in anticipation of an assassination attempt. Despite the fact that the majority of the “threats” have been negative commentary criticizing Obama’s presidency, the Obama administration is convinced that a white supremacist will become a viable threat to Obama’s life.

In 2008, Shawn Robert Adolf and Tharin Robert Gartwell were arrested in Denver, Colorado for allegedly stating racist views against the Obama during a meth binge. The two men had rifles, sniper scopes and were reported to be focused on killing Obama before he could become the Democratic Presidential nominee.

That same year, a resident of Charlotte, North Carolina was arrested after having made known his supposed intentions to kidnap Obama and “inflict harm” while being in possession of a military grade sniper rifle.

In the MSM, a story about a Washington, DC police officer that made a threat against the First Lady to fellow officers surfaced, yet just as quickly disappeared. Over breakfast, the officer allegedly said he would shoot Michelle Obama, the showed a picture of a gun he’d use on his cellular phone. Although the officer was not identified the idea was placed into the social meme. And it follows the plans cited by the DHS informant and lends credibility to his story.

In 2010, the Office of Intelligence and Analysis published a report entitled Rightwing Extremism, wherein domestic extremists, particularly white supremacists, were proposed to be the newest and most dangerous threat to the US since al-Qaeda.

Stated in the report, the DHS admitted that they had “no specific information that domestic rightwing terrorists are currently planning acts of violence, but rightwing extremists may be gaining new recruits by playing on their fears about several emergent issues. The economic downturn and the election of the first African American president present unique drivers for rightwing radicalization and recruitment.”

The DHS wanted to instill the idea that veterans were being recruited to become “right-wing extremists” upon returned from Iraq and Afghanistan.

Janet Napolitano intimated that military veterans could become instruments of domestic terror. When Napolitano’s comments were met with public disdain, the DHS amended their assertion that extremist groups were highly-marked; but rather it was a lone wolf type that would carry out the biggest act of domestic terrorism.

A DHS whistleblower states that there is a planned false flag attack that will involve a staged assassination attempt on Obama linked to a white supremacist that will incite a race war. Because of the violence, the US government will have to implement martial law to control the population.

The DHS informant stated: “The DHS is actively preparing for massive social unrest inside the United States. He then corrected himself, stating that ‘a civil war’ is the more appropriate term. Certain elements of the government are not only expecting and preparing for it, they are actually facilitating it.”