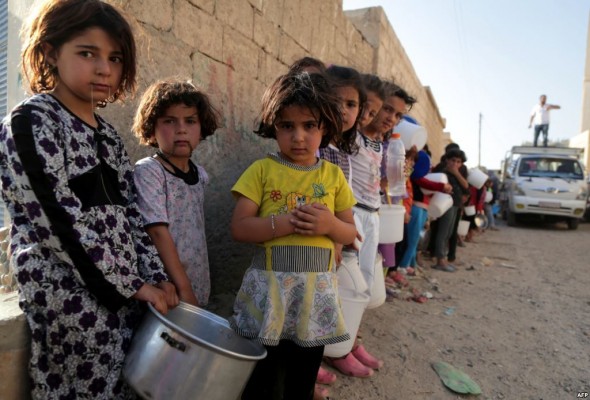 Omran al-Zoubi, Syrian information minister, said that his government will not entertain the idea of handing over power or install a transitional government during this polio virus crisis.

UN will be meeting in Geneva, Switzerland later this month and on the docket of talks is the proposition that Syrian President Bashar al-Assad would step aside and a united opposition would be placed in an interim while a more stable form of government is created.

Al-Zoubi told the press that his government will “not a handover of power [to a] forming transitional governing body.”

Concerning the Polio virus, Kindah al-Shammat, Syrian minister of social affairs, said: “The virus originates in Pakistan and has been brought to Syria by the jihadists who come from Pakistan.”

In Pakistan, the Bill and Melinda Gates Foundation (BMGF) and Global Alliance for Vaccines and Immunizations (GAVI) were blamed on an outbreak of acute flaccid polio has begun to surface in the region and killed 10k Pakistani children who were inoculated.

While in Pakistan, Gates and GAVI teamed up with the World Bank and UN Population Fund in the 1970′s under the Task Force on Vaccines for Fertility Regulation. The Task Force, “…acts as a global coordinating body for anti-fertility vaccine R&D.” GAVI is heavily funded by the BMGF for the global vaccination projects.

It was found out through an investigation, that GAVI was using an untested vaccine; giving this dangerous vaccine to Pakistani children shows the lack of empathy associated with these organizations.

GAVI was blamed for the deaths of 10,000 children in Pakistan when they came in and administered polio vaccines that resulted in casualties.

In this instance, the polio spreading through Syria would be “vaccine-derived polio” as originating from the “oral polio vaccine” which contains an attenuated (weakened) vaccine-virus” – or active polio virus.

This type of polio can “spread in the immediate community” and is especially dangerous to “a population [that] is seriously under-immunized”.

This would describe Syria because the polio virus has not been identified in the country for nearly 2 decades.

Waiting in the wings to take over Syria since 2012, is the Syrian National Coalition (SNC).

Last year, former US Secretary of State Hillary Clinton called for the creation of a new council to defend the rights of the Syrian people as defined by the UN, US and UK. This new leadership group would be expected to take more direction from those hired terrorists fighting the battles in Syria.

This was one of the foundational principles of the umbrella faction called the SNC.

George Sabra, selected leader of the SNC claims to be a Christian who studied in Israel and the US. Sabra has a degree in educational technology and geography; as well as having worked for the globalist-controlled Sesame Street.

Yet, Sabra’s ties to the Muslim Brotherhood through Salafis make him the perfect leader for the SNC.

Sanctioned by the UN to be a shell organization that can provide weapons to Syrian terrorist factions like the Free Syrian Army (FSA), take control over national resources and smuggle weaponry to designated hands is the purpose of the SNC. These factions depend on the support of the UN and cohorts to supply them with military-grade weapons, tanks and heavy artillery.

The SNC consists of “representatives from all opposition groups that are fighting to topple” the Syrian government headed by Assad.

The members are Muslim Brotherhood and other Islamic extremists who came together in August of this year to form the SNC. They employed the support of the US and UN when they proved to be a vital tool in coercing activists and minorities to rally behind their proxy war agenda.

They were originally called the National Coalition for Syrian Revolution and Opposition Forces (NCS-ROF) which was designed to facilitate money laundering through governmental channels to the appropriate terrorist factions fighting by-proxy for the Zionists against Assad.

Mark Toner, spokesman for the US State Department remarked: “We look forward to supporting the National Coalition as it charts a course toward the end of Assad’s bloody rule and the start of the peaceful, just, democratic future that all the people of Syria deserve.”

Having originated out of talks in Saudi Arabia, those from the US and various Arabian nations; including members of approved terrorist factions and political dissonant have united to become the defacto-government chosen to replace Assad.

Developed by the UN, the European Union and the US, the SNC is being primed to become the next mandatory and crucial step in destroying Syrian sovereignty and replacing it with “democracy”.

Given the power by the UN, the SNC is expected to take the National Transitional Council’s seat at the UN, as Saudi Arabia and forces that seek to delegitimize this defacto-government running Libya.