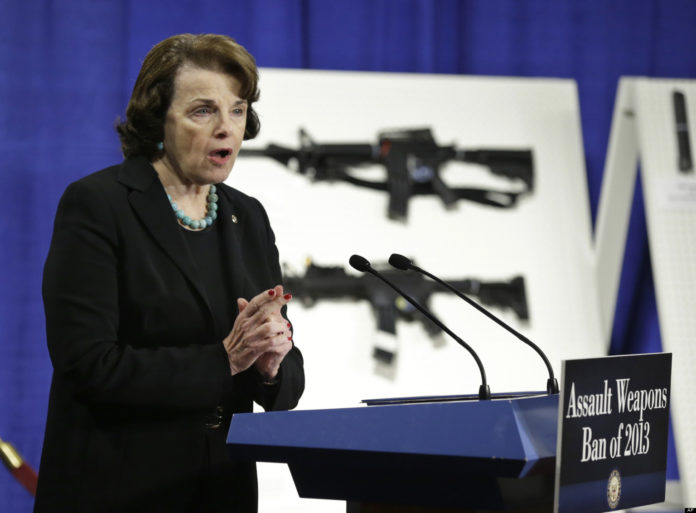 Senator Dianne Feinstein had Reverend Gary Hall, dean of the National Cathedral, preside over her press conference this week to lobby against 2nd Amendment rights and promote gun control. Hall said: “Now, everyone in this city seems to live in terror of the gun lobby. But I believe the gun lobby is no match for the cross lobby.”

Hall invoked the Christian evangelicals to rally for federal gun control because he could no longer justify a society that allowed ordinary citizens to keep and bear “assault weapons”. He then asked God to “bless our elected leaders with the wisdom and the courage needed to bring about the changes that the people demand.”

On a federal level, Senator Dianne Feinstein has “been working with my staff for over a year on legislation” based on “in-depth research” into gun-related violence; such as viewing pictures of guns from 1993 to 2012 to make comparisons.

The NRA says they have obtained a draft of Feinstein’s bill that seeks to redefine what is an “assault weapon” to include a more encompassing amount of guns. There would also be an initiative of forcing Americans to register their guns with the federal government under the National Firearms Act (NFA). This would give the federal government authority to confiscate weapons that were identified in violent acts.
Feinstein hopes to:

With the redefining of assault weapons, semi-automatic, centerfire, rimfire rifles will be illegal; as well as the M1 Carbine and Ruger Mini-14. No more than 10 round magazines will be available.

The NFA will collect taxes of an estimated $200 per gun purchased as well as the owner file their fingerprints, photograph, address and obtain permission before taking the gun across state lines.

Guns could not be sold privately or passed down to heirs. The owner would relinquish their gun to the US government upon death.

Feinstein said just after the Sandy Hook shooting that “the president will soon have legislation ‘to lead on’ in the gun control debate.” Feinstein is heading the march against the 2nd Amendment with the introduction of a bill into Congress in January of 2013. This document is just now being drafted with a proposal for the US House of Representatives.

Feinstein explains the bill “will ban the sale, the transfer, the importation, and the possession. Not retroactively, but prospectively. It will ban the same for big clips, drums or strips of more than 10 bullets. There will be a bill.”

In an interview this week, Feinstein remarked that she has worked on this for a long time. I’m not a newcomer or a novice to guns. The NRA sort of specialized in trying to denigrate me, but I don’t think there’s anyone around that’s spent 20 years on this subject, plus some.”

There are 150 types of guns on Feinstein’s “list” that should be banned; including most types of rifles pistols and shotguns.

The Assault Weapons Ban of 2013 (as it is being called) prohibits the sale, transfer, importation, and manufacture of those firearms listed in the bill.

By describing semiautomatic guns as “dangerous military-style assault weapons”, Feinstein made her stance clear. She stated: “Getting this bill signed into law will be an uphill battle, and I recognize that — but it’s a battle worth having.”

The point of this legislation is to “dry up the supply of these weapons over time. Therefore, there is no sunset on this bill.”

Feinstein went on to say that the “massacres don’t seem to stop” – referencing recent tragedies such as Columbine, Virginia Tech, the Batman shooting and Sandy Hook. She continued: “We should be outraged at how easy it is” for people to obtain guns.

Jay Carney, press secretary for the White House, said that it is his understanding that the 2nd Amendment should be perceived in the sense that “we ought to be able to take common-sense measures to reduce the amount of gun violence in this country and to increase the amount of security for our people, most especially our children.”

President Obama called upon Congress to pass over-reaching gun restrictions through legislation beyond the 23 executive orders and presidential memorandums he signed last week.

While Vice President Joe Biden along with White House officials descends on Richmond, Virginia to lobby for support for Obama’s gun grab, Feinstein will push legislation before Congress.