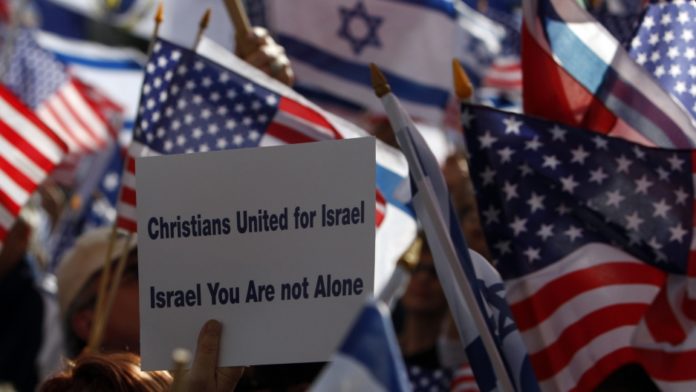 Pastor John Hagee, founder of Christians United For Israel(CUFI), has been at the forefront of pro-Zionist propaganda and integral in the building of an evangelical army ready to defend the agenda of the Zionist movement.

Beginning today, CUFI is holding a two-day conference to discuss the “critical decisions [that] are going to be made about Iran, Israel and the world” as they are supportive of the Obama administrations false flag assertions that Iran is hiding a nuclear program that intends to procure or produce a nuclear weapon.

Some of the speakers at the conference include:

The IDF are the military forces for the State of Israel. However, they are involved in societal issues and influential in controlling and dissemination of propaganda by directly participating in the local economy, culture and political venues. Since 1967, the US has had close ties to the IDF with regard to developing cooperation on military technology and defense systems.

The CUFI Conference will provide training sessions that will instill pro-Zionist perspectives on the Israeli-Arab conflicts. During the “Myth and Facts: Refuting the Negative Myths About Israel” workshop, attendees will be schooled as to defending the Israeli “battlefield ethics” in regard to the mass executions of Palestinians that continues to this day. While paralleling Israeli military experts who can “reveal the truth behind the headlines and empower you to respond to Israel’s accusers with confidence” Sgt Nadav Weinberg, veteran Israeli combat soldier will speak on the justification of the slow extinction of the Palestinian people on the Gaza Strip.

Educating evangelical Christians on the ins-and-outs of Christian Zionism is all important to the agenda of this conference. While the movement appears to support the Christian belief that the return of the Jews to the Holy Land (Jerusalem) will usher in the second coming of Jesus Christ (also referred to as Restorationism); the actual agenda is much more sinister.

The Globalist Zionists have used chicanery to convince the encompassing evangelical movement to dedicate their unwavering support to Israel because a Jewish return to the Land of Israel, along with the parallel idea that the Jews ought to be encouraged to become Christian, as a means fulfilling a Biblical prophecy has been common in Protestant circles since the Reformation. Yet the only event they are assisting in preserving is the creation of a One World Government.

Jewish Zionism is the primary advocate of the State of Israel and seeks to protect the movement from anti-Semitic discrimination, exclusion and persecution from other societies. By equating the Jewish people with Zionism, the global Elite have been able to hide in plain sight and become the over-reaching influence that we call by many different names. Historically, Zionism is a political credo introduced by the Rothschild family. The perfect cover of establishing a State of Israel has allowed the global Elite to use the influential power of government to advance their interests and manipulate an entire group of people for the sake of ensuring One World Government.

In support of Israeli and Zionist agendas, the Obama administration created the Atrocities Prevention Board (APB). This group is headed by Samantha Power, who is a member of Obama for America; a Blue State Digital organization that conducts surveillance on American citizens through social media sites to better market to them for the purpose of coercing them to support and ultimately vote for Obama in 2012.

Obama’s APB will monitor and seek to eradicate anti-Semitism in foreign nations in support for Israel’s schemes. The APB and Obama’s executive order called “Blocking the Property and Suspending Entry into the US of Certain Persons with Respect to Grave Human Rights Abuses by the Governments of Iran and Syria via Information Technology” will give the US government obligation to reprimand corporations on behalf of the Jewish community that use the Reform Movement’s Religious Action Center (RMRAC) lobbying firm to represent them.

The CUFI are a national association that supports Israeli agendas by infiltrating “every pro-Israel church, para-church organization, ministry or individual in America.” They intend on converting as many Christians to their pro-Zionist movement as they can through coercive programs of “education, outreach and events.”

Like the clergy response teams deployed by the Department of Homeland Security (DHS), CUFI use the Bible to keep their congregations under the directives of the US government like blind followers who are intimidated into going along without question because of Roman 13. As Durell Turberville explained: “. . . because the government is established by the Lord, you know. And, that’s what we believe in the Christian faith. That’s what’s stated in the scripture.”

The CUFI Conference in Washington, DC will bring together elected officials, representatives of the Zionist Elite, and the congregations of evangelical Christians that will be the “grassroots” voice that will demand efforts be made to usher in Global Governance; under the covering of expediting the stability of Israel so that Jesus Christ may return.

Religious coercion is a powerful weapon, and one that the global Elite have been working like puppet masters behind the scenes for centuries. Zionists hold key positions of absolute influence in entertainment, mainstream news media, banking and multi-national corporations. They are now gearing up to push their agendas through all avenues of control.

Pay attention, and you can see them coming.