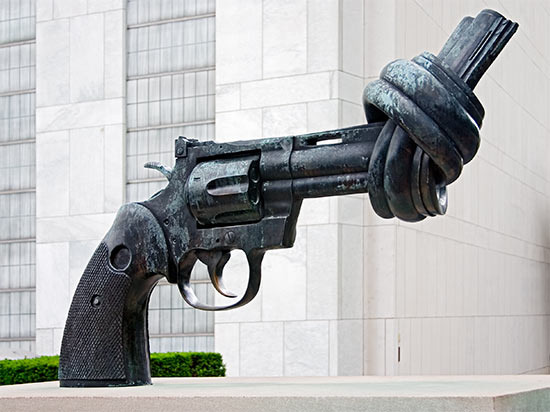 Hillary Clinton, US Secretary of State has announced that the Obama administration is working with the United Nations (UN) to approve, through the US Congress, the Small Arms Treaty (SAT).

Clinton affirmed that the US would facilitate talks with the UN in the Conference on the Arms Trade Treaty, as long as it “operates under the rules of consensus decision-making. Consensus is needed to ensure the widest possible support for the Treaty and to avoid loopholes in the Treaty that can be exploited by those wishing to export arms irresponsibly.”

This global gun control scheme, concocted by the UN, is called the International Arms Control Treaty (IACT). Disguised as a way to combat terrorism, insurgents and international criminals, this document endeavors to secure the world’s citizens cannot defend themselves.

The IACT will empower the UN to literally force the US government to:

• Enact internationally agreed licensing requirements for Americans
• Confiscate and destroy unauthorized firearms of Americans while allowing the US government to keep theirs
• Ban trade, sale and private ownership of semi-automatic guns
• Create and mandate an international registry to organize an encompassing gun confiscation in America

Senator Jerry Moran said in a letter (signed by 44 other senators) to President Obama; warning him not to continue his push for ratification of the SAT. Moran wrote: “Our country’s sovereignty and the Second Amendment rights of American citizens must not be infringed upon by the United Nations. Today, the Senate sends a powerful message to the Obama Administration: an Arms Trade Treaty that does not protect ownership of civilian firearms will fail in the Senate. Our firearm freedoms are not negotiable.”

The US is the world’s largest exporter of firearms; while private sales between citizens, collectors and sportsmen would all be internationally regulated with the approval of IACT. This includes rules over ammunition, and procurement.

The Obama administration, in an attempt to appear coy, agreed to sign only if other states agreed to as well. Yet many Senators, the National Rifle Association (NRA) and pro-gun advocates perceive IACT as the first step in international gun control and will not abide by while Obama gives the UN over-reaching power to destroy our 2nd Amendment and our Constitutional Republic.

A final version of SAT, which is based on IACT will be drafted by 2013.

Chris Cox, the NRA’s top lobbyist, explains: “As we have for the past 15 years, the NRA will fight to stop a United Nations Arms Trade Treaty that infringes on the Constitutional rights of American gun owners.” Cox feels that Senators like Moran “sends a clear message to the international bureaucrats who want to eliminate our fundamental, individual right to keep and bear arms. Clearly, a U.N. Arms Trade Treaty that includes civilian arms within its scope is not supported by the American people or their elected U.S. Senators. Senator Moran is a true champion of our freedom. We are grateful for his leadership and his tenacious efforts on this issue, as well as the 44 other senators who agree with the NRA’s refusal to compromise on our constitutional freedoms.”

According to ATK:
ATK has secured a major Indefinite Delivery/Indefinite Quantity deal to supply up to 450 million rounds of .40 caliber ammunition to the Department of Homeland Security . . . The 1 year contract with four option years comes at a time when many Americans believe that DHS, along with certain aspects of the military, will soon turn their sights on the American people during some sort of martial law scenario . . . We are proud to extend our track record as the prime supplier of .40 caliber duty ammunition for DHS, ICE,” said Ron Johnson, the president of ATK’s Security and Sporting group.”

This particular type of bullet is meant to expand upon impact “engineered for 100-percent weight retention, limits collateral damage, and avoids over-penetration.”

This order is not the first for DHS. In 2009, DHS contracted Winchester for delivery of 200 million hollow point bullets.

The economic state of America has caused US citizens to purchase armory at an incredible rate. A national “gun-run” last March saw a shortage of guns in stores for the first time.

“I have never seen such a situation in all my years as a gun owner, hunter and cop,” said Edna Aquino, a New York police officer and shooting instructor. “I’m hearing from fellow shooters that they are stockpiling ammunition these days because they are afraid of what they’re seeing in this country.”

The Federal Bureau of Investigation (FBI) has reported that an estimated 6 million requests for pre-sale guns in 2009 reflects a 26% increase.

In response to Americans arming themselves, President Obama is seeking Congress to approve the UN’s international governance over our 2nd Amendment while claiming that it is only an attempt to create more stringent gun legislation for the American public’s protection.