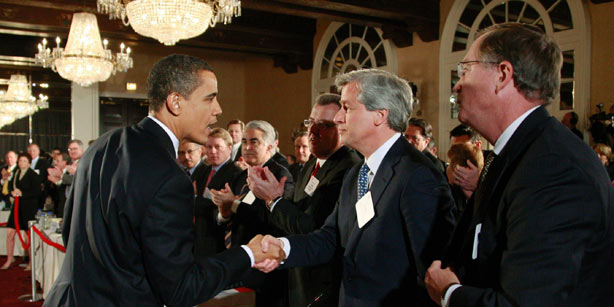 Although Obama mentioned that there is a need for stricter execution of the 2010 reform law, he praised JPMorgan as being one of the most respectable banking establishments in America.

This statement comes as no surprise considering that Obama has a substantial amount of money in two JPMorgan accounts. These accounts are valued at between $2.6 and $8.3 million.

JPMorgan Chase & Co is one of Obama’s biggest financial contributors. They donated $808,799 to the Obama campaign in 2008.

Regarding the $2 billion loss, Dimon has been nonchalantly claiming: “Hey, everybody makes mistakes — sure, we lost $2 billion, but we’ve still got billions more, and we’ll figure out this one ourselves without the need for any further regulations, thank you.”

He is trying to downplay the “mistake” as standard banking practice.

JPMorgan was using derivatives as if they were a portfolio hedge to mask proprietary trading. By using “portfolio hedging” Dimon covertly bet on the stock market.

Obama’s call for more banking reform appears to be double-speak.

While he is invested in JPMorgan, Obama is simultaneously stating that the Volcker Rule should be used to control $2 billion “mistakes”.

A public admonishment of Dimon and JPMorgan is expected. That Obama banks with JPMorgan is little known. To satiate the public’s views on Dimon after the financial loss, Obama is doing what any President would do in an election year. He is lying to the American public by omission; making reality appear to be one way while neglecting to disclose the truth.