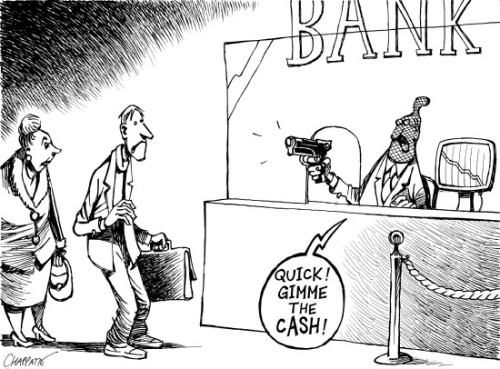 In 2007, the Sentinel Management Group (SMG) collapsed, leaving many customer segregated funds lost after they had been used as collateral. After a plethora of lawsuits and creditor claims, a decision earlier this month in the 7th Circuit Court placed the banking cartels ahead of customer claims for funds returned. Essentially, the Bank of New York Mellon (BNYM) sued to be first in line for return on stolen customer account monies – and won the right by the US court system.

In the mainstream media (MSM), the SMG collapse and subsequent ruling in favor of BNYM was touted as a difficulty “for customers to recoup money lost”.

SMG, a Chicago-based futures broker, had stolen more than $500 million in segregated customer funds to use as collateral on a loan to BNYM for in-house proprietary trading operations. Their books were audited by the National Futures Association (NFA), however the NFA admitted that they could not understand the convoluted mess they were provided by SMG to sign off on. And yet they did; and approved the audit.

BNYM sued SMG to re-coup any monies owed to them. However, these monies were customer segregated funds that SMG stole and re-hypothecated.

In federal court, John D. Tinder, US Circuit Court Judge ruled “that Sentinel failed to keep client funds properly segregated is not, on its own, sufficient to rule as a matter of law that Sentinel acted ‘with actual intent to hinder, delay, or defraud’ its customers.”

This means that once a banking customer deposits their money into an account with a bank, the funds become property of the bank. The customer, at the point of deposit, relinquishes all rights to that money regardless of any laws in place, legal assurances, claims or guarantees; and this extends from investments to private checking accounts.

Once the bank has physical possession of your money, they own it and can use it for any means they deem fit. The veil has been lifted on separation of customer and bank funds. They are now legally co-mingled.

The bank could use it as collateral (as SMG did), to pay off debts, or place it on the stock market to bump up their trading with extra cash. And in the event that the customer allocated funds are lost, the bank does not owe the customer the money back.

Essentially, once your deposit money in your bank account it is gone.

Fred Grede, SMG trustee remarked: “I don’t think that’s what the Commodity Futures Trading Commission had in mind. It does not bode well for the protection of customer funds.”

Our financial institutions have been planning for a financial collapse wherein the US government will not offer assistance. The resolution plans required by the Federal Reserve Bank, described schemes to have the major domestic banks remain afloat by selling off assets, finding alternative sources of funding, reducing risky measures that make a quick buck. These strategies were to be perfected with “no assumption of extraordinary support from the public sector.”

By selling “non-core assets” without upsetting shareholders while protecting the monetary system, taxpayers and creditors is the work of the mega-banks who have contributed solely to the destruction of the global financial markets. Bank of America (BoA) and Citibank have already begun to liquidate some of their assets – an action a bank takes when they are insolvent.

Both mega-banks and credit unions have been silently altering their deposit/withdrawal policies to deter customers from emptying out their accounts. Because the digital record of monies is greater than the physical cash held by banks, this is a scheme to stave off a “run on the banks”.

With the Patriot Act , signed in 2001 by former President George W. Bush, and extended in 2011 by President Obama states that all banks must record all banking transactions with photo ID and fingerprints that will then be sent to an FBI database wherein all banking information tied to each individual on file can be traced for future reference.

Of recent, when withdrawing cash from an ATM, the daily allotted amount has decreased with some banks, thereby forcing the customer to go into the branch and extract the difference with a teller. At this point, according to anonymous informants, the customer is taken into a backroom to be questioned as to why they want the cash, what they are purchasing with the cash, why they are not choosing to use a debit card or another form of digital trade to make the purchase.

These questions are not only intrusive, they are illegal.

Some anonymous sources have said that banking representatives who conduct the integrations are directed to keep a record of customer responses on an online application that will be sent to the FBI in conjunction with Patriot Act mandates on tracking banking activity.

While American citizens sit on the fence about whether or not they even subscribe to a banking collapse in the US, globalists like George Soros are investing heavily in gold. Soros recently “unloaded over one million shares of stock in financial companies and banks that include Citigroup (420,000 shares), JP Morgan (701,400 shares) and Goldman Sachs (120,000 shares). The total value of the stock sales amounts to nearly $50 million” and then purchased 884,000 shares of Gold with SPDR Gold Trust.

The mega-banks, through Wall Street, are also acquiring firearms, ammunition and control over private mercenary corporations like DynCorp and ‘Blackwater” as authorized by the Department of Defense (DoD) directive 3025.18.

Named as investors for the amassing of gun and ammunition manufacturers are Citibank, BoA, Barclays and Deutsche Bank who are pouring money into Cerebus and Veritas Equity who have taken over private corporations involved in the controlling riot situations.

The Federal Reserve Bank, one of the heads of banking cartels, has their own police force which operates as a protective security for the Fed against the American public. As part of the Federal Reserve Act signed in 1913, the designation of a Federal Law Enforcement – special police officers that are exclusively regulated by authority of the Fed (whether in uniform or plain clothes. These specialized police officers (who train with Special Response Teams) can work in tandem with local law enforcement or US federal agencies. These officers are heavily armed with semi-automatic pistols, sub machine guns and assault rifles as well as body armor.

Just this month, the Kaspersky Lab discovered Gauss, a banking surveillance virus believed to have the capability of stealing money out of customer’s bank accounts, as well as spying on banking transactions, stealing login information for social networks, email and instant messaging. So far, Middle Eastern banks have reported having been affected by Gauss – however both Citibank and Ebay’s Paypal have also been infected by this new viral threat to our banking systems.

It is clear that the financial collapse could be imminent. Banks are not only preparing with contingency plans, but also amassing a private police force for protection. With the legalization of stealing from customer secured funds, combined with a possible banking virus that could provide the perfect cover for an all-in-one banking holiday, the stage is being set for utter financial destination.

Once all customer funds were electronically transferred into off-shore accounts, the specialized police forces and hired mercenaries would be allocated forward to protect the technocrats from retaliation for their crimes.

The banking holiday will not come with flashing neon signs. Our warnings are right in front of us, if we choose to see them.