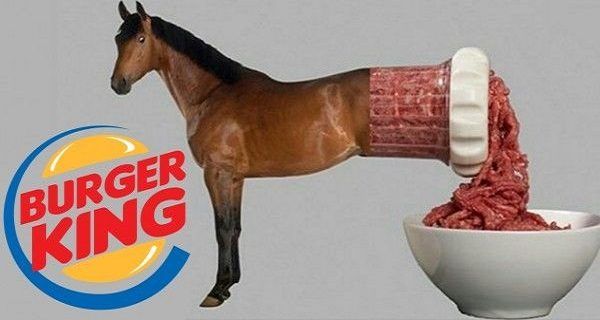 Taco Bell, subsidiary of American Tex-Mex said in a statement: “We would like to apologize to all of our customers, and we can reassure you that we are working hard to ensure that every precaution is being undertaken to guarantee that we are only supplied with products that meet the high standards we demand.”

American Tex-Mex is part of YUM Brands, which also owns Pizza Hut and KFC. The website claims that these franchises use “high-quality ingredients” and those are “100 percent beef” that are “seasoned with our signature recipe”.

Horse meat is used in Taco Bell tacos, burritos, gorditas, chalupas and Nachos. It is claimed by the corporation that the horse meat originated in “Europe”.

Jill McDonald, president and chief executive officer (CEO) of McDonalds UK explained in a statement that their products have tested negative for horse DNA. McDonald said: “I’m pleased to say that McDonald’s has not been affected. We voluntarily provided samples of all beef burgers currently available on our menu to the Food Standards Agency (FSA) for their own tests. All tests, including our own have now been completed and we can confirm that no horse meat has been found in any of McDonald’s products.”

Burger King said in a statement: “Four samples recently taken from the Silvercrest plant have shown the presence of very small trace levels of equine DNA… we have established that Silvercrest used a small percentage of beef imported from a non-approved supplier in Poland. This is a clear violation of our specifications, and we have terminated our relationship with them.”

The US Department of Agriculture (USDA) is considering approving the slaughter of horses for meat and human consumption in the US for the first time since 2007.

Justin DeJong, spokesperson for the USDA conveyed that “several” slaughterhouses are requesting this change. DeJong said: “These companies must still complete necessary technical requirements and the F.S.I.S. must complete its inspector training, but at that point, the department will legally have no choice but to go forward with the inspections.”

Farmbox Meats (FBM) has been supplying horsemeat in the United Kingdom. An investigation into the factory has been initiated with 20 police and a team from the Food Standards Agency (FSA). The investigators are acting on reports that horsemeat was sold s beef and labeled as cow meat for burgers and kebabs.

The FSA has officially suspended operations of FBM in order to inspect the facility, meat and packing procedures.

It is suspected that Peter Boddy Licensed Slaughterhouse (PBLS) actually supplied the horse carrion to FBM. Just like FBM, PBLS claims they have not committed any wrongdoing.

The horsemeat was intended for Belgium and Ireland.

Prime Minister David Cameron stated publically that the actual issue with the horsemeat scandal is the inaccurate labeling. Cameron’s environment select committee (ESC) said that those who prepared the horsemeat and passed it off as beef were following good hygiene standards.

The ESC surmised that:

The veterinarian drug, Bute, was found in the horses slaughtered for meat and sent to processing plants to be passed off as beef in products sold to customers. Bute, a.k.a. phenybutazone, is a painkiller and non-steroidal anti-inflammatory (NSAID) used on horses and considered harmful to humans if ingested.

In the US and the UK Bute has been shown to cause the suppression of white blood cell production; as well as aplastic anemia. The drug was created to treat rheumatoid arthritis and gout over 60 years ago.

This drug has been linked to cancer and banned from use.

The Chartered Institute of Environmental Health (CIEH) remarked that this situation demonstrates that the public’s health has been endangered.

Barry Gardiner, member of the ESC, said: “If people are prepared to lie to you about what’s in your food then you can have no confidence they are not putting other stuff in as well. These people are criminals; they could be putting anything in there. When there’s been a total failure of the food security system you can have no trust in the food.”

Davies maintains that the drug is sporadically prescribed to patients suffering from severe arthritis, and while it has been known to produce serious side effects, “it is extremely unlikely that anyone who has eaten horsemeat containing bute will experience one of these side effects.”

Coop, a chain of supermarkets in Switzerland, has discovered that their brand of lasagna was made with horsemeat. The supermarket has removed the frozen food item from their shelves and is offering customers their money back.

Nestle, a Swiss corporation, formerly owned Findus (the corporation that was first identified as having horsemeat in their products) still had control over facilities in Switzerland. Findus was made with Swiss horsemeat passed off as beef.

The US regularly exports horses for slaughter in Europe and China. Former racehorses are sold at auction for a low price, purchased by “killer buyers” and shipped overseas to be used as meat for human consumption.

This process of purchasing horses for slaughter is called the slaughter pipeline. The animals are packed for transportation without food, water or rest for extended periods of time.

Cheryl Jackson, head of the equine protection division of the Human Society, explained: “It’s highly likely that kill buyers are going to scoop up horses that show up at auction.”