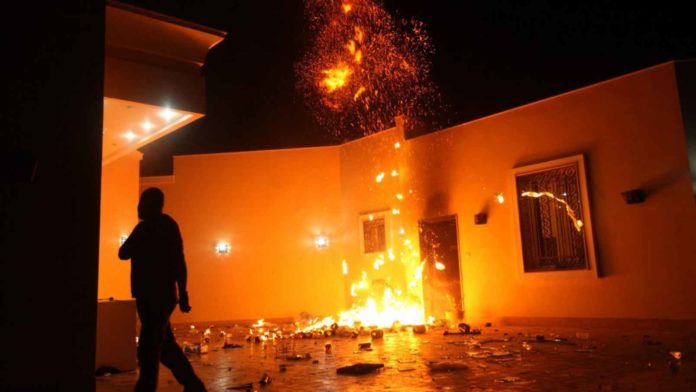 On the 11th anniversary of the September 11th attacks on the US, a bombing in Libya occurred that resulted in the deaths of US Ambassador J. Christopher Stevens, US State Department communications specialist and former US Air Force veteran Sean Smith and two US Marines. However, the official story provided by the US government and Hillary Clinton, US Secretary of State do not explain the actual events that took place before and on the attack by alleged terrorists.

John Christopher Stevens was promoted in less than 1 year through the ranks from a Pearson Fellow of the Committee on Foreign Relations to US Ambassador. His promotion is questionable. His background was as a diplomatic lawyer. Being a foreign exchange student in his youth and versed in multi-cultural government programs, Stevens had deployments to Jerusalem as a political officer and deputy principal officer as well as working under the title of economic officer in Riyadh. Between 2007 and 2009, Stevens was a special representative to the National Transitional Council (NTC) during the US-sponsored Libyan revolution. Then suddenly, Stevens is elevated to the US Ambassador status in May of 2012 when he was stationed in Tripoli.

Sean Smith, an employee of the US State Department, whose work under Hillary Clinton since 2009, under official title of service information management officer (SIMO), was a true diplomat in his own right. Smith also had strong ties to the gaming world as a regular player on the Eve Online (Eve) multi-player online game. Eve specializes in games directed toward role-playing as soldiers, strategists, and diplomats in an otherworldly setting.

Smith’s name within Eve was “Vile Rat” and used the game to chat with players, as well as pass encrypted communications to the US State Department. A close friend to Smith on Eve relayed a disturbing message provided by jabber (an instant messaging service) by Smith that “assuming we don’t die tonight. We saw one of our ‘police’ that guard the compound taking pictures.” Being a member of the Council of Stellar Management, Smith played the role of a diplomatic officer in Eve.

The friend recalls that Smith was on Eve the night of the attack and conveyed that sirens could be heard in the distance, and suddenly would go offline, then pop back up. In the last communication, Smith said “GUNFIRE”, logged off – and never returned.

Ned Coker, a representative of the maker of Eve Online, CCP Games, explained in an interview: “I can tell you that CCP and its employees are overwhelmingly saddened by the news of Sean Smith’s passing, as we are when we learn of any player who is tragically lost. Many of us interacted with him professionally and personally and, honestly, it feels like our words are lost adrift–amongst such a tremendous, soul-affirming outpouring from the EVE community. The CSM, of which he is an alumnus, will be posting a guest dev blog in his honor.”

During Smith’s 6 years on Eve, he used the game to communicate covert messages with the US State Department. Being the perfect cover, online games like Eve provide a pathway of communication between the US government and overseas operatives on nearly secured channels because of the cryptic messages being passed back and forth. 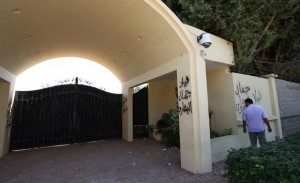 The “compound” where Stevens, Smith and 2 US Marines were killed was a gated-villa in Benghazi leased by the US State Department. Mohammad al-Bishari, landlord to the villa stated that it was burned down and that Stevens and Smith died of smoke inhalation while 2 other American officials were gunned down at the gated-villa.

Just prior to the staged attack at the gated-villa, the staff was flown to Europe after being carted to Tripoli, where the actual US Embassy is located. The villa was empty when Stevens, Smith and the 2 US Marines arrived.

An anonymous Libyan security guard reported that there were no protests prior to the attack at the gated-villa where Stevens was staying in Benghazi. The guard said that he was hired months before the attack by a British security firm to protect the villa.

Bishari said that the men who attacked the villa, looted and stole sensitive documents containing the names of Libyans working with the US and the Saudi Arabian government in terroristic operations, as well as oil contracts tying the US and Saudi Arabia, and burned it to the ground after murdering Stevens. The assailants were armed with American assault rifles, rocket-propelled grenades and carried the black flag of the Ansar al-Sharia, or the Partisans of Sharia (PoS).

Bishari said that Stevens would be staying at the villa after his arrival back from Tripoli. Stevens was continuing his mission of “conducting surveillance and collecting information on an array of armed militant groups in and around the city.” One of the groups Stevens was monitoring was PoS who are also Muslim Brotherhood as well as Salafis.

Stevens, in conjunction with the CIA, were gathering sensitive intelligence going as far back as 2011. The attack on the villa in Benghazi posed a problem for the CIA who evacuated their operatives and contractors from the area prior to the attack. At one point, Stevens met with the PoS in Benghazi, while staying at the gated-villa when talking with the NTC.

The NTC is a defacto-government in Libya that assisted the US in the overthrow of Muammar Gaddafi in 2011. Headquartered in Benghazi, the NTC is the self-proclaimed “only legitimate body representing the people of Libya and the Libyan state.” 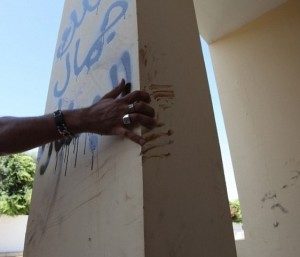 Stevens spent time negotiating with the NTC because of the international community’s recognition of the faction as a legitimate government because of their seat at the UN, as well as assisting the CIA in watching the PoS which is why he spent so much time in Benghazi, and why he travelled to the city after returning from Germany, Austria, and Sweden.

Because of Stevens involvement with the extremist faction the PoS, his dealings with the NTC and his surveillance operations with the CIA, he became a sitting duck when he travelled to Benghazi to stay at the villa.

Stevens was concerned about being on a terroristic hit-list and worried that the PoS may be planning his death. He contacted the US State Department and called for more security. Hillary Clinton, Secretary of State, and responsible for diplomatic security, denied Stevens’ request. And in response, there was an order from the US government to disarm the US Marine Security by refusing them live ammo while allowing them to keep their guns.

Clinton has been working hard to cover her tracks and involvement in creating the perfect scenario that would facilitate the attack which occurred. After a Congressional investigation was initiated by Darrell Issa, chairman of the House Oversight and Government Reform Committee and Jason Chaffetz, House Representative of Utah, Clinton asked for more time before Issa “comes to any conclusions.”

The State Department claims that cryptic warnings of an impending attack on Benghazi was relayed, yet devoid of a time frame and therefore ignored.

When speaking to UN Secretary-General Ban Ki-moon, Clinton explained that US-sponsored terrorist factions have been used in Benghazi to escalate the violence. Clinton said: “Now with a larger safe haven and increased freedom to maneuver, terrorists are seeking to extend their reach and their networks in multiple directions. And they are working with other violent extremists to undermine the democratic transitions underway in North Africa, as we tragically saw in Benghazi.”

In a letter to Issa, Clinton suggested that Issa’s investigation be held off until after the November presidential elections or even pushed back into the early part of 2013 because witnesses were being questioned at the State Department’s Office of Legislative Affairs.