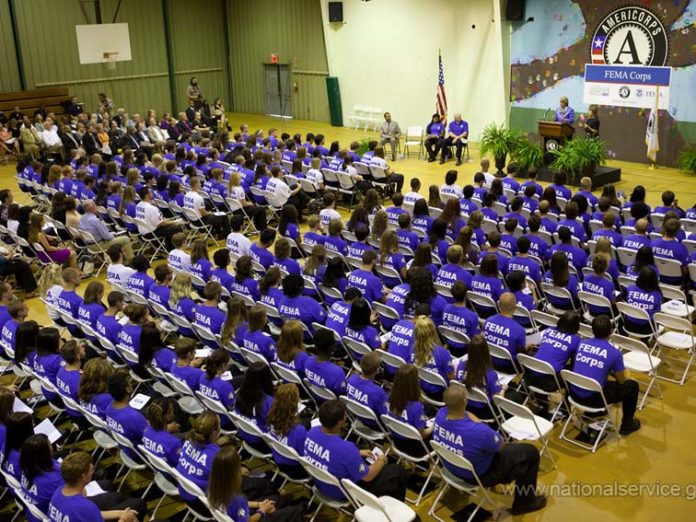 On August 13th a new class of 231 FEMA Corps members graduated to assist the US government in future disaster preparedness whether state sponsored or natural. These members trained with at the Corporation for National and Community Service (CNCS) and will be leaders at FEMA’s Center for Domestic Preparedness where they will be assigned specific roles ranging from community relations to Disaster Recovery Center support.

The CNCS is a federal agency that “engages more than five million Americans in service through Senior Corps, AmeriCorps, and Learn and Serve America, and leads President Obama’s national call to service initiative, United We Serve.”

They utilize local communities for the sake of public-private partnerships to rework the structure of those communities to serve the needs of the federal government. By implanting pro-government propaganda, using rural resources for the benefit of private sector corporations under the guise of “fostering civic engagement”, the CNCS revisions the American landscape to reflect their agendas as directed by the US government.

A five-year strategic plan outlined by the CNCS explains how a network of programs aimed at collaborating 6 areas designated as “priority” is:

The Edward M. Kennedy Serve America Act of 2009 (EKSAA) is the stratagem that is the basis of volunteerism that is government mandated. When Obama signed the EKSAA, he expected Americans to take communitarianism to heart and act accordingly. Obama said: “We need your service, right now, at this moment in history. . . I’m asking you to stand up and play your part. I’m asking you to help change history’s course. Put your shoulder up against the wheel. And if you do, I promise you – your life will be richer, our country will be stronger, and someday, years from now, you may remember it as the moment when your own story and the American story converged, when they came together, and we met the challenges of our new century.”

This initiative employs citizen battalions of government trained Americans, ages 18-24, to serve with the federal government in a new generation of emergency managers.

In 2009, President Obama said that: “We cannot continue to rely on our military in order to achieve the national security objectives we’ve set. We’ve got to have a civilian national security force that’s just as powerful, just as strong, just as well-funded.”

Intimating that the internal affairs of the US necessitate a civilian army because America’s security was threatened from within harkens to dictators of the past that created their own youth groups of trained citizens that were brainwashed into believing that continuity of government supersedes basic adherence to fundamental human rights, i.e. Hitler’s Youth Group.

According to the FBI-sponsored Southern Poverty Law Center (SPLC) and the Department of Homeland Security (DHS) there are indeed internal threats such as Constitutional militias, Americans who pay for goods and services in cash, and the ever-present Islamic extremists.

The FEMA Corps have doubled the size of AmeriCorps and the Peace Corps with a civilian army trained and ready to follow orders disseminated by the federal government. In March, Obama announced that the DHS and FEMA would devoted 1,600 service corps members to disaster preparedness, response and recovery. By combining FEMA and the DHS, the federal government’s reach is doubled and more assured whether the disaster is “man-made or natural.”

The Boy Scouts of America have taken a darker role in securitizing our nation with a new mission replete with fighting terrorism, engaging in sequestering illegal immigrants and being brainwashed to exude a militarized mentality.

DHS and the FBI combined to indoctrinate American youth by “training thousands of young people in skills used to confront terrorism, illegal immigration and escalating border violence — an intense ratcheting up of one of the group’s longtime missions to prepare youths for more traditional jobs as police officers and firefighters.”

These government-sponsored Boy Scouts were expected to be impromptu law-enforcement who is targeting the known enemy as defined by Islamic or Arabic overtones. The Obama youth group are trained for any challenges that would-be faced in a globalist-controlled future.

Now the US government is developing a citizen corps called Community Emergency Response Teams (CERT) that take neighborhood watches and regular citizens and turn them into basic responders to disaster scenarios with workshops and training exercises.

This concept was beta-tested by the Los Angeles City Fire Department (LAFD) in 1985. After the Whittier Narrows earthquake in 1987, the LAFD decided to train citizens and government employees in disaster response training. FEMA and other agencies of the US government have taken this concept into their own hands by creating a federalized and state-controlled version to set clear priories and dispense responders in any given disaster situation.

Under CERT, citizens are trained and approved by FEMA to access the resources of any given community, partner with local law enforcement, recruit participants and infiltrate community groups to further indoctrinate the public as to knowing specifically how the federal government wants Americans to respond during a disaster.

Back in March, under the term terror drills many students nationwide were bused off to FEMA camps (or prison camps) without their parent’s permission and even prior knowledge. Schools in Michigan, Pennsylvania, and New Jersey participated in “evacuation” or “relocation” drills that took children off campus to “alternative locations” which only served to further terrorize them.

Exposing our children to staged scenarios such as a shooter killing fellow classmates or inventing a villain which would necessitate student to board buses en mass and be taken to an undisclosed location where they would be safe frightened parents who found out after the fact that their children had been forced to participate.