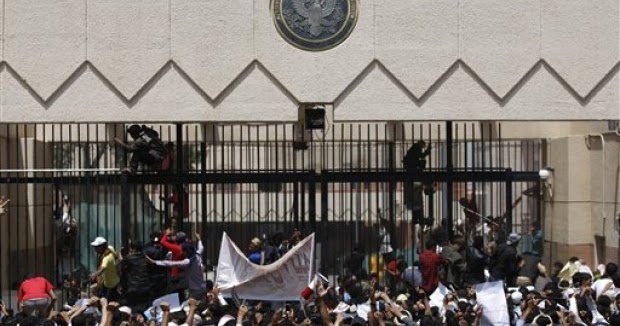 On September 15th, Obama stated in his weekly address that the US “must also send a clear and resolute message to the world: those who attack our people will find no escape from justice.”

Obama asserts that: “We are in contact with governments around the globe, to strengthen our cooperation, and underscore that every nation has a responsibility to help us protect our people. We have moved forward with an effort to see that justice is done for those we lost, and we will not rest until that work is done.”

US Embassies across the globe are coming under attack with coordinated efforts by the CIA-controlled al-Qaeda. In weekly Sydney, Australia, 8 plants are being charged with inciting and participating in violent clashes with police and protesters at a rally sparked by the US-sponsored anti-Islamic film that is being blamed for this sudden uprising in the Islamic world.

The Tunisian government has come out to publicly condemn the attack in Libya. In their region, an American school and embassy compound were secured by Tunisian police against thousands of demonstrators who replaced an American flag with the flag of Islam admit looting and burning buildings.

The use of fake revolutionaries is also extending to Afghanistan at the US-British military complex where Prince Harry is stationed. Two US Marines have been confirmed killed while NATO forces are fighting against Taliban forces.This attack is being fueled by the anti-Islamic film, as demonstrators have assaulted the compound.

Sounding the alarm and call for continued violence is the US-funded al-Qaeda in Yemen with a statement posted on Islamic militant websites inferring that al-Qaeda is moving toward pushing protests within the Muslim nations incited by a film produced by the Zionist pasty Sam Bacile.

The statement calls protests to “expel the embassies of America from the lands of the Muslims” and called on protests to continue in Muslim nations “to set the fires blazing at these embassies.”

A day before the orchestrated attack on the US Embassy in Libya, Senator Dianne Feinstein was warned about the violence witnessed in Arabic nations since the US Embassy bombing in Libya that will spark outrage against Americans and the US. Feinstein said that according to the FBI and DHS these outbursts “could worsen in the coming days.”

In fact, the US government received warning about the pending attack on the US Embassy in Libya days before it took place and did not act to prevent it. The security military surrounding the Embassy compound was stripped of their live ammunition prior to the attack.

The RAND Corporation, globalist think-tank and originator of many false flag propaganda, surmise that between 2009 and 9/11, “the U.S. government reported forty-six incidents of “domestic radicalization and recruitment to jihadist terrorism.” RAND went on to claim that Americans are playing a high-level operational role in al-Qaeda and aligned groups.

Globalists point to al-Qaeda as the origination of radicalization as evidenced in Anwar al-Awlaki who was purported to have opportunities to spread violent Islamic ideology in the US. The use of social media sites and evangelical preachers could cause a boon in terrorist groups as explained by counterterrorism experts.

In a US Senate Committee on Homeland Security and Governmental Affairs report, the radicalization of Islam is spreading throughout American prisons. There is also a growing possible movement within the US military wherein active duty soldiers are recruited to commit crimes.

Mainstream media is reporting that the FBI informant Nakoula Basseley Nakoula, a.k.a. Sam Bacile, has been taken for questioning. After Nakoula was imprisoned in 2009 for banking fraud, he was employed as an informant for the FBI just before he was used as a pasty in the making of the film Innocence of Muslims that the US government is claiming they had no hand in producing. In order to cover their tracks, and facilitate the psy-op that convinces the American public that Islam and al-Qaeda are legitimate terrorists, the FBI is holding Nakoula for questioning.

At first, the Zionist-controlled Israeli government tried to assert that Nakoula was not an Israeli citizen and according to their intelligence, there was no record of Nakoula being in California.

Now the story has changed and Nakoula is a real person who can be used as a pasty to be condemned by the US government to justify their “official” version of what is happening. As they create a fake revolution in the Islamic world with the aid of their fake terrorist group al-Qaeda, Nakoula is playing his part in the theater of lies.

The goal of the Zionists in the Middle East is to use fake Jihadists that are supported by NATO and the US against US embassies and military installations to create the belief that radicalization of Islamic ideology has erupted and must be controlled.

The UN’s International Covenant on Civil and Political Rights (ICCPR), articles 18 and 27, state that minority religions and rights must be respected. Based on this fact, an Iranian senior official is claiming that a lawsuit could be filed against Obama in response to the anti-Islam film “Innocence of Muslims” and the US government’s involvement in the production of the film.

The resurrection of al-Qaeda from the 9/11 attacks within the US is not arbitrary. The misrepresentation of this fake revolution is designed to convince American citizens that there is a movement toward extremism within the domestic US.

The use of the anti-Islamic film combined with the resurgence of al-Qaeda has become reality only with the sacrifice of American citizens such as US Ambassador J. Christopher Stevens and others with the goal of discrediting Islam as a complete fanaticism and not a legitimate religion.

This entire scenario is obviously controlled by the Zionist control grid with the use of their puppets in the US government. CIA-sponsored al-Qaeda creates a protest after a film funded by Zionists and produced by the US government is disseminated throughout the Muslim world. On the 11th anniversary of the 9/11 attacks, we are faced with the outbreak of al-Qaeda once more; however this time it is the entire Muslim world in every country on every continent we need to be worried about. And this is the beginning of the absolute lockdown of the planet under the schemes of the Zionists with the aid of the US government.