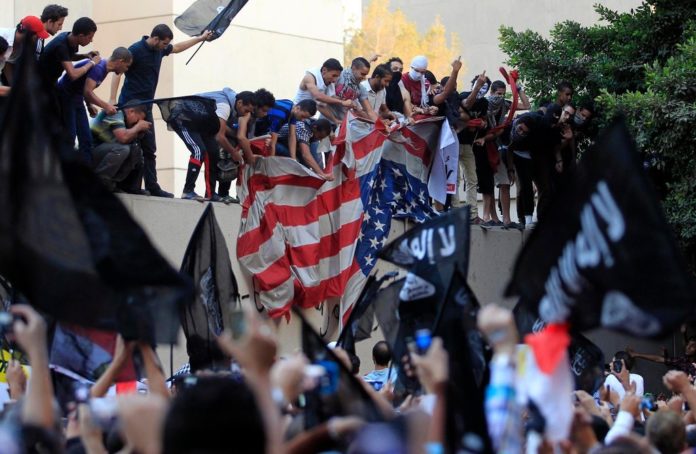 The US ambassador to Libya, John Christopher Stevens, and three embassy staff employees were killed in a bombing of the Benghazi consulate. Based on alleged outrage concerning a Zionist-sponsored film, Islamic gunmen stormed the embassy and set fire to the consulate.

US officials are asserting that Stevens and three others who died in the embassy bombing were the victims of a planned attack with the use of al-Qaeda, the CIA-controlled terrorist group. Rumors about the bombing being retaliatory against the death of a Libyan member of al-Qaeda are a cover-story.

House Representative Mike Rogers, chairman of the House Intelligence Committee stated that there is evidence that this was a “well-armed, well-coordinated event. It had both indirect and direct fire, and it had military maneuvers that were all part of this very organized attack.”

Al-Qaeda has been used by the US to create many disturbances, fake revolutions and false flag attacks. The latest is the recruitment, training and assembly of the Free Syrian Army which are coordinated on CIA-controlled bases in Turkey, and sent over the Syrian border to be monitored by al-Qaeda for the benefit of the US government.

Rogers has pointed toward the use of US military grade weapons and missiles by the enraged gunmen. This same array of armory have been supplied to other insurgents working by proxy for the US government to topple governments in the Middle East.

There are reports that Stevens and the three other embassy employees that were killed did not die in the bombing, but rather were attacked in an attempt to flee the embassy. According to those reports, Stevens was suffocated, not killed in the blast as the White House is saying.

Stevens was integral in the transition of Libya, as Obama states that Stevens as a “courageous and exemplary representative of the United States.” This may have a connection as to why he was singled out and killed.

In a document published by the Integrated Threat Assessment Centre, Islamic extremism is a dangerous motivating ideology to be monitored. Incidentally, the document states that quite a few “attacks” of Islamic extremism have occurred within the domestic US leaving the motivation a mystery.

Playing his part in the manufactured attack, Sam Bacile, the filmmaker responsible for the video that has allegedly sparked protests in Libya, that have resulted in the bombing of the US embassy in the country and killing of four Americans, has his training in filmmaking in Israel.

Bacile, an Israeli Jew and real estate developer, suddenly became inspired and wrote the film entitled “Innocence of Muslims” that was initially slated for release last July, yet only now has surfaced and become a nuisance to the Islamic world, according to mainstream media.

Bacile said that “Islam is a cancer, period.” He admits that he was funded by more than 100 Jewish donors and worked to produce the film in California.

Israel Channel 10 is claiming that Sam Bacile is a pseudonym and that the film’s creators are ex-Muslims who have converted to Christianity – as well as Iranian. It is also purported that one of the men who was involved in the embassy bombing and the making of the film was a member of the Egyptian Coptic Christians.

In a near obvious staged display, the protesters took the American flag that was flown over the embassy, tore it into pieces and burned them outside what mainstream media is describing as a “fortress-like embassy building” in Cairo.

In response, President Barack Obama has called this bombing and subsequent public display an “outrageous attack” and immediately increased security at US embassies across the globe. Violence is being reported across the Muslim nations with Egypt and Libya spear-headed as the heart of the movement.

The embassy in Benghazi is located near a courthouse wherein the al-Qaeda flag was flown in a display of control in Libya after the US government-sponsored murder of Muammar Gaddafi. Under the National Transitional Council (NTC), the al-Qaeda flag was planted, then immediately denied. However, the NTC calls for Sharia law as the “basic source” of legislation in Libya. These extremists supported the removal of Gaddafi and assisted in the influx of fake revolutionaries which caused manufactured clashes against Gaddafi’s government.

Using deniable assets from the prison in Guantanamo Bay, the establishment of al-Qaeda forces for the sake of engaging Gaddafi’s forces was funded by the US government with designs to set up an Islamic emirate to be “sow a scare in Europe.”

Muhammad Morsi, the Muslim Brotherhood plant and current president of Egypt, who is an Islamist, is being pressured to take action against the citizens of Egypt.

The Muslim Brotherhood has been a terrorist arm of the Obama administration, yet according to a recent statement concerning the Libyan bombing, the group is concerned about condemning Sam Bacile and the US Coptic Christian group.

Beyond supporting Morsi during the election process to become Egyptian president, Obama had members of the Muslim Brotherhood over to the White House for dinner and conversation; as well as giving the terrorist group $1.5 billion in foreign aid after Morsi was made president.

The statement from the Muslim Brotherhood reads:

“The Freedom and Justice Party (FJP) expresses strong condemnation of the film produced and promoted by US Coptic Christian individuals, which deals serious insults to the Prophet Mohammed.

The party considers the film a racist crime and a failed attempt to provoke sectarian strife between the two elements of the nation: Muslims and Christians.

Moreover, the FJP considers this movie totally unacceptable, from the moral and religious perspectives, and finds that it excessively goes far beyond all reasonable boundaries of the freedoms of opinion and expression.

The film is certainly a blatant violation of religious sanctities, international norms and conventions on human rights which emphasize that freedom of expression with respect to religion [and] must be restricted by controls within the law that safeguard public interest, in order to protect lives, morals, rights and freedoms.”

It is clear that the Obama administration has invested in the Muslim Brotherhood plant, Morsi as a proxy dictator to facilitate US interests in Egypt. Libya, having been ravaged by the US since the murder of their leader Gaddafi, is being set up as the home of a festering group of Islamic extremists who are focused on seeking revenge against the US.

Zionist-controlled Israel is interjecting the unsubstantiated idea that Sam Bacile is actually a false flag designed to justify the actions of Islamic extremists as well as linking these filmmakers to Iran.

The global Elite are using fake revolutions through al-Qaeda, the Muslim Brotherhood and the murder of the US Ambassador Stevens to bring about their desire to destroy Iran.