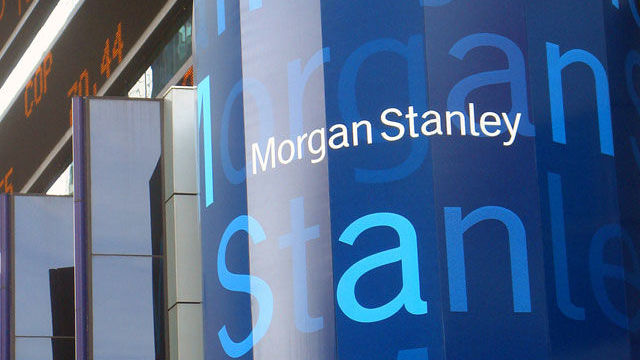 The fall of the House of Morgan has begun as stock prices on the global market at Morgan Stanley (MS) begin to fall on the New York Stock Exchange (NYSE).

According to Rick Wiles: “I’m hearing rumors that another major financial house is going to implode. In fact, the name I’ve been given is Morgan Stanley . . . It’s going to be put on the sacrificial alter by the financial elite.”

MS, technically speaking, is classified as insolvent based on mark-to-market valuation. By selling off non-core assets, MS has been able to “reduce its European exposure” through the manipulation of hedge funds and allocation of funds to failing financial corporations. Some mainstream media outlets tout that the Federal Reserve Bank will come in and assist MS in their insolvency and that MS “just isn’t going out of business anytime soon.”

However, on the bond market, MS is being treated like “a junk-rated company.” Moody’s the rating agency that sells their ratings to whomever will pay for a triple A score, have announced they will downgrade MS’ ratings which would put all US banks at risk.

Otis Caset, director of credit research at Markit confirms: “What has driven that, obviously, is Europe. The perception is — correctly or incorrectly — that Morgan Stanley is one of the U.S. banks most exposed to Europe’s problems.”

In 2008, with the first pre-meditated financial explosion, the cause for the bailout of the banks was a large sum of cash needed quickly to repay China who had purchased large quantities of mortgage-backed securities that went belly-up when the global scam was realized. When China realized that they had been duped into buying worthless securitized loans which would never be repaid, they demanded the actual property instead. The Chinese were prepared to send their “people” to American shores to seize property as allocated to them through the securitized loan contracts.

To stave this off, the American taxpayers were coerced by former President Bush and former US Treasury Secretary Hank Paulson. During that incident, the US Senate was told emphatically that they had to approve a $700 billion bailout or else martial law would be implemented immediately. That money was funneled through the Federal Reserve Bank and wired to China, as well as other countries that were demanding repayment for the fraudulent securitizations.

To further avert financial catastrophe, as well as more debt or property seizure threats by the Chinese, the Euro was imploded thereby plunging most of the European countries into an insurmountable free-fall for which they were never intended to recover.

MS exposure to mortgage-backed securities and derivatives fraud may have finally brought the financial implosion to America. As Otis points out, it is the exposure to the Eurozone that was the nail in the coffin at MS. This only furthers the fact that financial collapse is imminent in America and the repercussions are already laid out.

However, this planned implosion of the mega-banks only serves to fit the global Elite’s plans.

George Soros has also sold his shares and interest in JPMorgan (701,400 shares), Goldman Sachs (120,000 shares), and Citigroup (420,000). He has reallocated these funds to gold.
The insolvency of MS means that the customer funds that are held in MS can be hypothecated (or co-mingled) by the bank into their funds to be used to pay off any loans or debts owed by the bank.

Earlier this month, on August 9th, the 7th Circuit Court of Appeals (CCA) ruled that BNYM can be moved to first in line of creditors over the customers that had their funds stolen by Sentinel Management Group (SMG).

In fact, the banking institution is now legally allowed to use those customer funds deposited as collateral, payment on debts for loans made, or free use on the stock market to purchase investments as the bank sees fit.

When a customer deposits money into a bank, the bank issues a promise to have those funds available when the customer returns to withdraw the deposited amount.

With the SMG ruling, those funds become the property of the bank once they are deposited. If the bank is insolvent, under duress or filed bankruptcy, those customer deposited funds can be co-mingled with the bank’s funds and used for the purposes of the bank without recourse to the customer.

As explained in Readiness Exercise 1984 (Rex84) the end of the US dollar combined with civil unrest would cause the US government to declare martial law in order to preserve continuity of government.

Since 2010, all the mega-banks in the US have filed resolution plans with the Fed describing how to liquidate banking assets without causing further damage to a failing financial system. By selling “non-core assets” without upsetting shareholders while protecting the monetary system, taxpayers and creditors is the work of the mega-banks who have contributed solely to the destruction of the global financial markets.

Both Bank of America and Citibank have already begun liquidity with the sale of their non-core assets proving that these two financial institutions are insolvent. Add to this list MS.

While mega-banks are unloading their assets under duress, they are acquiring smaller banks and keeping their names to fool the American public into thinking they are banking with an independent as they consolidate financial power in the US.

In response to the coming implosion, the Federal Reserve Bank is inventing electronic fiat. This keeps the Ponzi scheme going. On the surface, it all appears to ok. However, undercover and out of the general public’s sight, the manipulation of insurance rates, market values, mortgages are directly contributing to the complete banking system collapse.

An estimated 70% of some of the mega-bank’s worth is provided by the government by subsidies; meaning that without the money provided by the US government, these banks would go under tomorrow. And by watching the financial climate as it is emerging, it appears that we are witnessing just that.

Combined with the solicitations of the Department of Homeland Security (DHS) for 1.8 billion rounds of hollow point bullets, 1400 pounds of highly dense explosives material and urban warfare drills being conducted across the nation, it is clear that this insolvency of MS is one more proof that marital law coinciding with financial collapse is dangerously close.