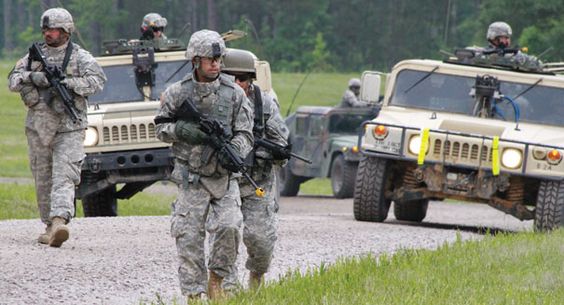 In 2010, the US Army’s Operating Concept 2016-2028 was published and explains how armed forces in the US and overseas will behave in the future. Specific tactical operations, special “theater”, and organized forces are outlined along with the capabilities and priorities of the US armed divisions.

In simple terms: a full spectrum operations manual that details stratagems both domestic and foreign.

Presidential administrative National Security Strategy documents explain how to defend the Republic within domestic borders with suggested scenarios where a group of political reactionaries commander a prominent area of a town or city which requires that the US Army support local law enforcement in conjunction with state officials – including local government representatives.

In times of domestic insurrection, the Executive Branch can enforce armed support to state governments and local police departments with or without their approval because the continuity of government is the endgame and must be preserved. In this event, domestic intelligence gathering becomes paramount to maintain a clear chain of military command to be able to stop the home-grown insurgency. This would empower the Department of Homeland Security with the approval of the President, to enact the Insurrection Act and deploy armed troops within the US to stop rebellion, insurrection, and lawlessness. While the initial powers are reserved for the state and local governments, and Posse Comitatus (PCA) restricts and delays the Executive Branch in enforcement, the current presidential administration with the aid of the Pentagon is seeking to rescind the PCA in order to facilitate control over domestic terrorism.

The Federal Protective Service (FPS) has been given the responsibility to protecting federally owned property while preparing for civilian led riots expected in the near future. And part of the preparatory measures was an order of 150 sets of riot gear that was requested to be filled exponentially.

The FPS is anticipating that police or military wearing the gear would encounter “blunt force trauma” to the upper torso, as well as potential beatings with “blunt objects”.

In June of this year, the US Army requested bids for riot gear that was answered by A2Z Supply Corp, in which specified equipment was to be delivered to West Point Academy in New York.

The purpose of these patrol units was to aid “with civil unrest and crowd control or to deal with potentially horrific scenarios such as massive poisoning and chaos in response to a chemical, biological, radiological, nuclear or high-yield explosive, or CBRNE, attack” and provide “coordinate defense support of civil authorities” under NORTHCOM and other commands including federal homeland defense efforts.

As outlined in the Intelligence Preparation of the Battlefield (IPB) processes are defined by operational environments in regard to battle space, effects, evaluation of threats and adversaries while determining the course of action. In regard to civil situations, and to maintain intelligence and operational purposes, preparations with regard to terrain are inconsequential.

Enabled by an executive order from 1982, which states that intelligence gathering abroad could be used domestically and on American citizens, permanent resident aliens which are categorized as American persons.

According to the RAND Corporation document, Street Smart: Intelligence Preparation of the Battlefield for Urban Operations, the use of IPB in urban areas will alleviate some of the anticipated “analytic difficulties posed by urbanized areas.”

By training in American cities, the armed forces can realize maneuvers and special considerations that are needed to control urban infrastructure in the case of civil disturbance and insurrection. Having foreknowledge of the people living in the specified cities that are marked for control assist in the “critical operational success” of not only “knowing the enemy” but also the ability to retain a level of concealment and surprise.

When the US Army is “called upon to operate in villages, towns, and cities their directive will be to “neutralize American citizen’s technological capabilities” using “sophisticated intelligence equipment” and advanced tactical training.

The Marine Corp has created a law-enforcement battalion (ELB) consisting of specialized military police officers (SMP) will take the role of current street cops while still remaining part of the Marine Corp.

The tactical operations, combined with the current training exercises being observed across our nation were laid out in documents like this. And the evidence that this is real and is being planned for are coming in eye witness reports at a staggering rate.

National Guard has been witnessed in Virginia conducting “wellness checks” and patrolling residential neighborhoods as well as downtown city areas.

One of the numerous reports of preparations for martial law that are happening across the nation is taking place now until August 17th in Sheboygan County, Wisconsin where a training exercise with M1117 armored security military vehicles that were used in Afghanistan to hunt for insurgents.

The US Army Reserve “wanted to alert the public to the training dates so residents are not alarmed when a pack of heavily armored military vehicles is driving around the county.”

Captain William Gedddes commented that the drills were conducted to make sure the officers remain alert and do not become “rusty” in their training with the M1117s.

While the Sheboygan County police department had no foreknowledge of the drill, Geddes commented that locals should not “create safety hazards” on the roads be drawing attention to the vehicles.

The US Army, wanting to control the public perception of their drills, claimed that they were training on civilian roadways and wanted to make this known to the public so as to not insight speculation as to their presence.

The Pentagon, decrying the false flag assertion of increased use of improvised explosive devices (IEDs) in the US, is asking Congress to lay aside Posse Comitatus (PCA) in an effort to increase their use of military on the streets of America.

According to Section 1385 of the Posse Comitatus Act: “Whoever, except in cases and under circumstances expressly authorized by the Constitution or Act of Congress, willfully uses any part of the Army or the Air Force as a posse comitatus or otherwise to execute the laws shall be fined under this title or imprisoned not more than two years, or both.”

While specialized military police are currently working with local law enforcement, the Pentagon is attempting to alleviate “legal restrictions on the activities of US armed forces” by convincing Congress that the PCA is unnecessary.

Law-enforcement battalions, consisting of specialized military police officers (SMP), are being set up to work with local police while remaining part of the Marine Corp.

Citing James Holmes’ apartment and use of home-made bombs, Army Lt. Gen. Michael Barbero told Congress that the threat “from both homegrown terrorists and global threat networks is real and presents a significant security challenge for the United States and our international partners.”

Furthermore, USNORTHCOM and Leon Panetta, US Secretary of Defense, has readily admitted that US armed forces will collaborate with local law enforcement “if called upon”.

The US Army has put out a solicitation for riot gear in preparation for civilian unrest in the US. On their official government website, the call for non-lethal equipment coincides with requests from DHS for allocation of riot shields, face masks, polycarbonate batons and body armor.

In collaboration with an executive order signed in 2001 by former President George W. Bush, DHS will “coordinate the executive branch’s efforts to detect, prepare for, prevent, protect against, respond to and recover from terrorist attacks within the United States.”

Contained within the US Army Military Police training manual for Civil Disturbance Operations are outlines describing how the US military will use the arsenal at their disposal to quell domestic riots, confiscate firearms and kill Americans during times of mass civil unrest.

The explicit use of “deadly force” when confronting “dissidents” is clearly stated with the refusal of a “warning shot” and the directives toward weapons that rioters or demonstrators will experience in the name of continuity of government.

Many citizens are witnessing movement of military equipment from the East and the West coasts of America. In plain sight, a train carrying tanks was seen come through Burbank, California.

The globalist Fascists who are turning our free nation into a Dictatorship view this probable fact as a threat and are preparing to quash it right now. Because of this infiltrated takeover of our country, we are all in grave danger.