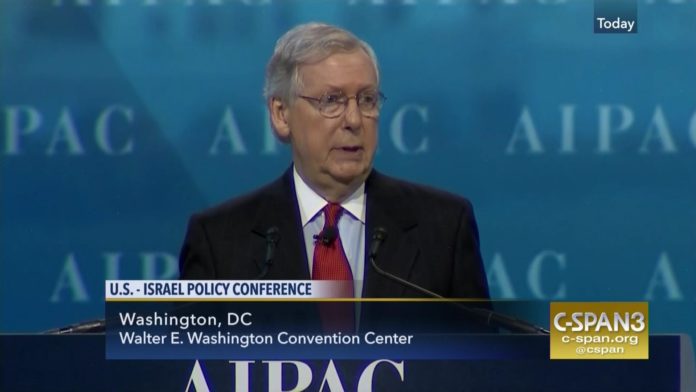 The Council for the National Interest (CNI), an independent organization that coerces Capitol Hill on US foreign policy in the Middle East to preserve “American values, protects our national interests, and contributes to a just solution of the Arab-Israeli conflict”, has published a message sent to Congress from the American Israel Public Affairs Committee(AIPAC) that create a “virtual state of war with Iran, even though Iran has no nuclear weapons program.”

AIPAC is referring to the House of Representatives proposal HR 1905, The Iran Threat Reduction and Syria Human Rights Act of 2012; authored by Representatives Ileana Ros-Lehtinen and Howard Berman.

On August 1st, the House and Senate passed HR 1905. In the House, this measure passed by a vote of 421-6 and the Senate’s approval was unanimous. The President only has to sign it to take effect.

The current sanctions on Iran stem from the Iran Threat Reduction Act, which tightened a financial noose around Iran’s ability to conduct business. However, since then, countries that purchase Iranian oil (such as India, China, and Russia) have traded in gold instead; leaving the US Petro-dollar to suffer and threaten the US dollar’s status as the global reserve currency.

In May, Hillary Clinton, US Secretary of State, spoke in India about their transactions with Iran for oil, their use of gold as currency, and stressed that they could use the global reserve market to purchase oil instead of Iran.

India, along with other BRICs nations is supporting the move from the global reserve currency from the US dollar to gold. This makes the US very nervous, as they do not back up their fiat with precious metals.

According to CNI, Israel has pursued “building the most powerful military” with the “acquisition of US taxpayer money, weaponry and technology” as well as focusing on “preventing other nations in the region from becoming financially and militarily competitive.” This endeavor has pointed to Iran as a threat to their over-reaching domination in the Middle East.

Israel has used the US military in wars against surrounding nations like Iraq to clear the path of any would-be contenders. Iran is simply next on their list. Going back to 1992, Israel was preparing for war with Iran; either by attacking them alone or coerce the US government to join in on their agenda. It appears that the latter is the case.

Daniel Pipes, a supporter of Israeli agendas, said that Benjamin Netanyahu, Israel Prime Minister should threaten to use nuclear weapons against Iran as a means of “applying pressure” on the US.

AIPAC proudly states that they have the backing of the UN as well as the US to impose “economic pressure on Iran”. They assert that the US and Israel must “unite in a tough response to Iran” against the false threat of Iranian nuclear weapons.