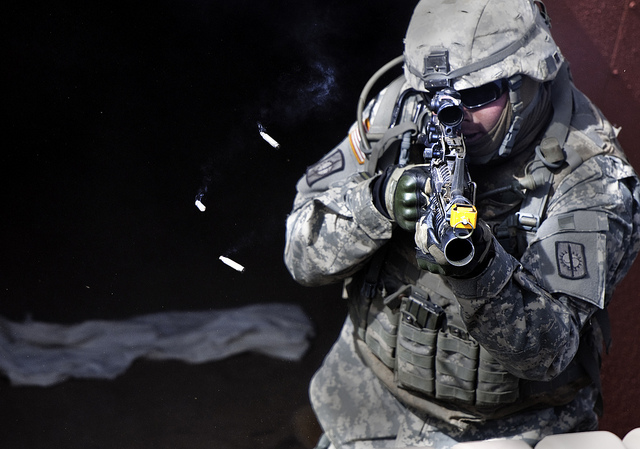 In Camp Pendleton, California, the Marine Corp have created a law-enforcement battalion (ELB) consisting of specialized military police officers (SMP) that will be deployed to assist in investigating crimes dealing with drug trafficking, train security and terrorism.

The ELBs contain an estimated 500 SMPs and trained dogs. While capitalizing on their investigative and police training, they will take the role of current street cops while still remaining part of the Marine Corp.

Maj. Jan Durham, commander of the 1st Law Enforcement Battalion at Camp Pendleton states: “Over the past 11 years of combat operations in Iraq and Afghanistan, some lessons learned painfully, there has been a growing appreciation and a demand for, on the part of the war-fighter, the unique skills and capabilities that MPs bring to the fight. We do enforce traffic laws and we do write reports and tickets, and that’s good, but we do so much more than that.”

Having been deployed overseas prior to their new placement, these SMPs will secure evidence and assist local police departments in building cases against predetermined criminal networks. They may even conduct raids in cities and add to the show of force that is now being used to intimidate the average citizen.

Maj. Jan Durham, commander of the 1st Law Enforcement Battalion at Camp Pendleton states: “Over the past 11 years of combat operations in Iraq and Afghanistan, some lessons learned painfully, there has been a growing appreciation and a demand for, on the part of the war-fighter, the unique skills and capabilities that MPs bring to the fight. We do enforce traffic laws and we do write reports and tickets, and that’s good, but we do so much more than that.”

Loren Thompson, defense analyst, said: “This is a smart idea because the biggest single problem the Marines have in dealing with low-intensity types of threats is that they basically are trained to kill people. It’s good for the Marines to have skills that allow them to contain threats without creating casualties.”

Last June, the Department of Defense began testing military drills in Missouri. While local residents of St. Louis City were warned not to be “alarmed” as US Army tanks travelled down residential neighborhoods. They were told that this is not the beginning signs of martial law.

Drills involving the US military and mock civilian uprisings or riot scenarios were conducted at Vigilant Guard 2010 where “Americans” were told to demand food and their Constitutional rights while soldiers practiced subduing and containing them.

Martial law was declared in Chicago before the NATO Summit commenced. Clear “red Zone” areas around Chicago were marked while the DOT shut down access roads in and out of the downtown area. Plans to evacuate the city should “terrorist attacks” be carried out.

Joliet State Prison was transformed into a detention center for NATO. Urban warfare drills were conducted months prior to the Summit to prepare for the possibility of civilian evacuation.

According to Doug Hagmann, private investigator, his high-level source at DHS confirmed that the agency is preparing for “massive civil war” in the US.

He continues: “It’s going to get so much worse toward the election, and I’m not even sure we’re going to have an election in this country. It’s going to be that bad, and this, as well, is coming from my sources. But one source in particular said, ‘look, you don’t understand how bad it is.’ This stuff is real; these people, the Department of Homeland Security (DHS), they are ready to fight the American people.” 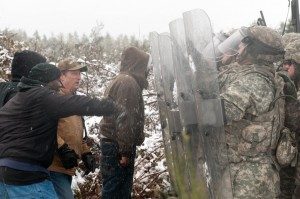 Hagmann confirmed that the cause of the national emergency would be centered on the US dollar. Because hyperinflation is coming because of the “un-sustainability of the American dollar” money will be worthless which will trigger massive panic due to a complete economic collapse.

Back in March, Obama signed executive order National Defense Resources Preparedness (EO 13603) which gives the federal government permission to seize all property in the interests of national security “in peacetime and in times of national emergency.” Neither of those terms was defined, leaving the door open to situational interpretation.

Obama’s EO was nearly a copy of the Defense Production Act of 1950 under FEMA. This Act says all means of human survival are the President’s to confiscate and control at his discretion.

The NDAA denies American citizens inherent Constitutional and human rights in the event of a national emergency. There is no mention of Congress’ role of authority in it, leaving speculations as to the President’s plan for the future of our Congressional branch of government.

All allocation of resources to the government will be “as needed” to defend the nation. This ambiguous term could allow federal and military agencies to view the private property of civilians as theirs which could force an incident or create a situation.

Setting this EO in place, prior to these manifestations of evidence of a silent martial law being enacted domestically; this is the nail on the coffin of our Constitutional liberties. Now we are witnessing the military on our streets. DHS is acquiring SWAT and riot gear and massive amounts of ammunition.

The evidence of their next step is becoming clear.