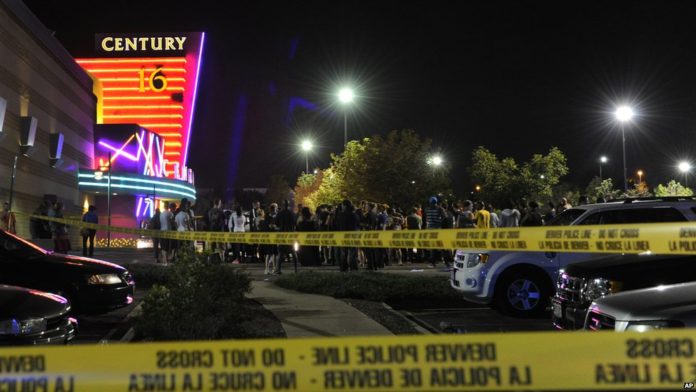 In a sold-out theater, showing the new Batman film “Dark Knight Rises”, an anonymous gunman entered in a gas mask, threw two gas canisters into the crowd and opened fire with an assault rifle, shotgun and a .40 caliber Glock pistol. The result: 12 people dead and 59 injured. The mainstream media is hailing this unprovoked assault as “one of the deadliest mass shootings in recent US history”.

Tayler Trujillo, who was in the audience, remembers: “He didn’t say anything. He kicked the door open with his foot and held it open with his foot and he threw something and it landed in the row in front of me. Then it, like, went off — kind of like a firework — and gas filled the room. All you heard was ‘Get down! Get down! I felt like I couldn’t breathe, my eyes were really super watery. And then shots just started being fired, so many, and it stopped for a second, and everybody was, like ‘Go! Go! Go!’ but then he started to fire again and then I had to go back down. Honestly, I just started praying. I thought I was going to die.”

The gunman wore complete SWAT team gear (including a tactical armored vest, throat protector, groin protector, a gas mask and a ballistic helmet) and fired with a steady and seemingly trained hand, as witness Jennifer Seeger recalled. “Every few seconds it was just boom, boom, boom,” Seeger said. “He would reload and shoot and anyone who would try to leave would just get killed.”

The suspect has been identified as James Holmes, a 24-year-old, quiet, anti-social medical school dropout from the University of Colorado.

Police in Denver claims to have traced James’ weapon purchase of a Remington shotgun and a Glock handgun to a Bass Pro Shop in Denver. A second Glock is supposed to have been procured at Gander Mountain store in Aurora, Colorado.

Law enforcement in Denver are claiming that James’ apartment was “booby trapped” with potential explosives and had to evacuate surrounding residents in adjacent buildings. Bomb technicians were brought to the scene to decipher how to disarm “flammable material”. Dan Oates, Aurora police chief, asserts that James’ apartment interior was fairly disturbing, containing “devices that look to be sophisticated”.

The propaganda building around the shooter is simply to support the coming attacks on the 2nd Amendment in conjunction with the UN’s agenda of global gun control.

Bloomberg went on to say: “I mean, there’s so many murders with guns every day. It’s just gotta stop. And instead of these two people, President [Barack] Obama and Governor [Mitt] Romney talking in broad things about, they want to make the world a better place. OK, tell us how. And this is a problem. No matter where you stand on the Second Amendment, no matter where you stand on guns, we have a right to hear from both of them, concretely, not just in generalities, specifically, what are they going to do about guns?”

The mainstream media jumped on the gun control bandwagon when Piers Morgan, CNN correspondent, remarked: “America has got to do something about its gun laws. Now is the time. Lunatics like this will always try and get guns. It should be 100,000 times harder than it is for them to do so. That’s my point.”

Gun-control advocates are clamoring around this recent shooting as justification for the Obama administration to come forth and impose legislation against existing gun laws. Jay Carey, White House press secretary told the press while on Air Force One that Obama is committed to “ensuring that those who should not have guns under existing law do not get them. There has been progress in that regard in terms of improving the volume and quality of information in background checks.”

Yet Obama claims to support the retention of the 2nd Amendment.

In New York, the UN is holding the International Arms Trade Treaty Conference (ATT) where they are seeking to create an “elaborate a legally binding instrument on the highest possible common international standards for the transfer of conventional arms.”

In 2011, the UN’s General Assembly recognized “that disarmament, arms control and non-proliferation are essential”, meaning citizens could no longer own firearms if there were to be peace in the world.

However, the UN sees the armory of governments as an “effective national control”. To ensure the UN is able to take gun rights away from every citizen in every country they have devised this treaty to influence “national legislation, regulations and procures on the transfer of arms, military equipment and dual-use goods and technology” for the maintenance of international peace and security.

Obama has been pushing the US Congress to ratify a version of the ATT.

Forty-four Senators, including Jerry Moran have warned Obama not to continue with his support of ATT.

The Obama administration, in an attempt to appear coy, agreed to sign only if other states agreed to as well. Yet many Senators, the National Rifle Association (NRA) and pro-gun advocates perceive ATT as international gun control in the US and will not abide by while Obama gives the UN over-reaching power to destroy our 2nd Amendment and our Constitutional Republic.