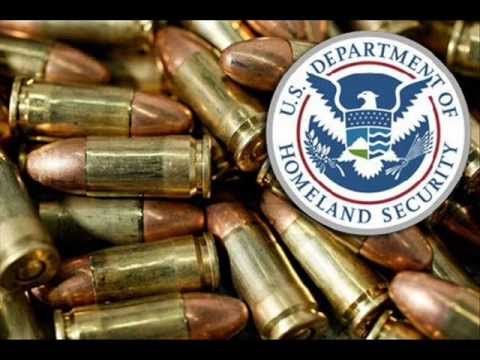 The Department of Homeland Security (DHS) is preparing for civil unrest in surprising ways.

While Americans are purchasing guns by the millions, DHS has ordered 450 million rounds of hollow point ammunition in the last 7 months.

Winchester Ammunition, in 2009, was awarded a special contract to supply DHS with 200 million rounds of .40 caliber hollow point ammunition.

WASHINGTON, D.C. — Winchester Ammunition was recently awarded a contract by the Immigration, Customs and Enforcement (ICE) division of the Department of Homeland Security to supply a maximum of 200 million, 40 cal. rounds over the next five years. Source

As reported a PR Newswire release.:

ATK has secured a major Indefinite Delivery/Indefinite Quantity deal to supply up to 450 million rounds of .40 caliber ammunition to the Department of Homeland Security . . . The 1 year contract with four option years comes at a time when many Americans believe that DHS, along with certain aspects of the military, will soon turn their sights on the American people during some sort of martial law scenario . . . We are proud to extend our track record as the prime supplier of .40 caliber duty ammunition for DHS, ICE,” said Ron Johnson, the president of ATK’s Security and Sporting group.”

The Fbo.gov website, in a post published reported that the US Forest Service secured a bid for 300,000 rounds of ammunition that will be delivered to Albuquerque, New Mexico.

According to the Prepper Podcast Radio Network:

These requirements seem normal considering the possibility of running into grizzly bears and wolverines. These, to me, are acceptable quantities to order.

And of course the FBI needs about 100,000,000 rounds of .40 caliber ammunition for law enforcement needs. It posted the request November 15, 2011 and the order will be awarded this week.  Oddly, it states a fixed price indefinite-delivery indefinite-quantity type contract; however the pricing requirements go up to 100,000,000 rounds.

In total, US government agencies have ordered 750 million rounds of .40 caliber ammunition. In an unprecedented spending spree, the US government is arming themselves in the name of “domestic terrorism”.

To go with their purchase of bullets, DHS has ordered bullet resistant booths that probably will be used at unannounced checkpoints at undisclosed places across the US.

A press release from the corporation that provided the booths boasted about the contract with the DHS:

These booths coincide with the exorbitant amount of bullets and “detention centers” being activated all over the country. Congress has passed a bill concerning these FEMA Camps; as a documented fact. These camps will detain American citizens that are huddled like cattle into them. The US government is planning a disaster, whether real or fabricated to gain complete control over the US population.

DHS is also looking at vendors for emergency food, blankets, underwater body bags, and hydration supplies. DHS calls certain cities and states as “in need”. Those include:

The focus of their disaster scenario is the New Madrid Fault System.

The Federal Emergency Management Agency (FEMA) procures and stores pre-packaged commercial meals to support readiness capability for immediate distribution to disaster survivors routinely.  The purpose of this Request for Information is to identify sources of supply for meals in support of disaster relief efforts based on a catastrophic disaster event within the New Madrid Fault System for a survivor population of 7M to be utilized for the sustainment of life during a 10-day period of operations.   FEMA is considering the following specifications (14M meals per day):

Requested Menus to include snacks (i.e. fruit mix, candy, chocolate/peanut butter squeezers, drink mix, condiments, and utensils).  All meals/kits must have 36 months of remaining shelf life upon delivery.   Packaging should be environmentally friendly.

The Federal Emergency Management Agency (FEMA) procures and stores blankets to support readiness capability for immediate distribution to disaster survivors routinely.  The purpose of this Request for Information is to identify sources of supply for blankets in support of disaster relief efforts based on a catastrophic disaster event within the New Madrid Fault System for a survivor population of 7M to be utilized for the sustainment of life during a 10-day period of operations.   FEMA is considering the following specifications (14M blankets per day):
– 100% cotton;
– White;
– 66″ x 90″

It is clear that our government is planning to detain Americans through any means necessary. At the same time, US citizens are purchasing guns in record numbers, hording food and water and preparing themselves for the disaster that will come.

It is the US government’s intention to force their citizens into FEMA Camps with the threat of being shot.

This is not conspiracy.